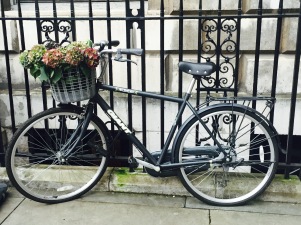 Chained to a black fence outside the Royal Academy in London rests a black bicycle with a basket of flowers. To someone walking by, it could be mistaken for a visitor’s bike, someone who locked up their mode of transportation while they visit the collection. However, this bike is not one for recreation. It serves as a reminder of Ai Weiwei. When his passport was revoked on November 30, 2013, Ai kept his bike outside his studio and placed a fresh bouquet of flowers in its basket every morning until he was given back his passport on July 22, 2015. A bicycle with a basket of flowers is now parked outside of the Royal Academy, where his retrospective show is located, as a tribute to Ai Weiwei.