Rotating on pointe in a clear sphere is a ballerina. She is no ordinary ballerina as instead of a head she has a globe. Yinka Shonibare created this work for the Royal Opera House in 2012. The ballerina was inspired by the ballerina Margot Fonteyn, one of the most famous ballerinas in England. 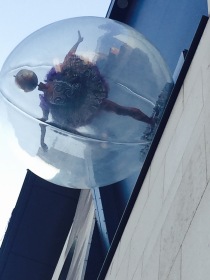