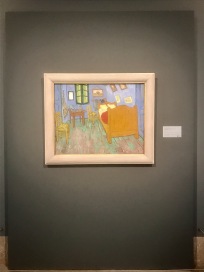 Van Gogh, known to be inspired by his surroundings, featured a bedroom in Arles, France. In fact, Van Gogh depicted this bedroom three times. Now the paintings are dispersed around the world, one on view at the Vincent Van Gogh Museum in Amsterdam, another on at the Musée d’Orsay in Paris and the final work  at the Art Institute of Chicago. “The Bedroom,” from the Art Institute of Chicago, is the second version Van Gogh painted and was recently loaned to the Norton Simon. In “The Bedroom,” Van Gogh turned the floor green, the walls purple and created a perspective that plays with the viewer’s perception. 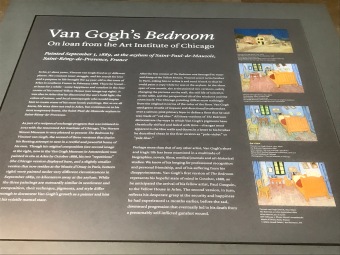 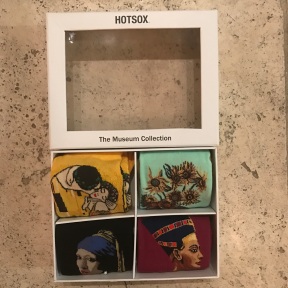 Are your feet feeling chilly during these winter months? I know mine are. That is why I went shopping for some calf-length socks. And what did I find? Art history socks! HOTSOX has created a set of socks known as The Museum Collection which illustrates Gustav Klimt’s “The Kiss,” Van Gogh’s “Sunflowers,” Johannes Vermeer’s “Girl with a Pearl Earring (which has a white bead to represent the pearl) and Nefertiti. Not seeing your favorite work of art? Have no fear, HOTSOX has other art prints and Museum Collection Sets which include Michelangelo’s “David,” Edvard Munch’s “The Scream” and Katsushika Hokusai’s “The Great Wave off Kanagawa” to name a few. 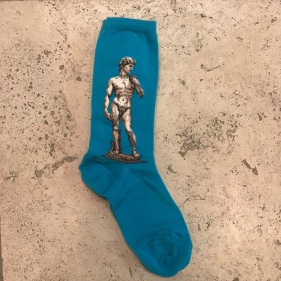 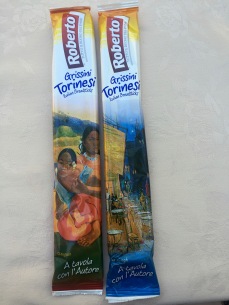 Who doesn’t want to look at art while they have a snack? These packs of Italian breadsticks come with details of famous paintings by Gauguin and Van Gogh so you can munch and view art at the same time. 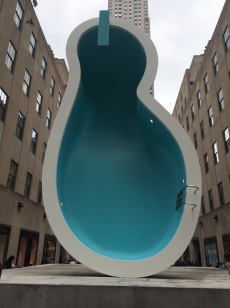 Located in the center of Rockefeller Center in NYC is a giant teal and white swimming pool. However, this is no ordinary pool. This particular pool is a 30 foot tall vertical statue designed by Elmgreen & Dragset to resemble Van Gogh’s ear. Elmgreen & Dragnet are artists who frequently incorporate swimming pools into their work and this is no exception. In a city where personal swimming pools are scarce, this sculpture provides for a playful commemoration of a world renowned artist, Vincent Van Gogh.